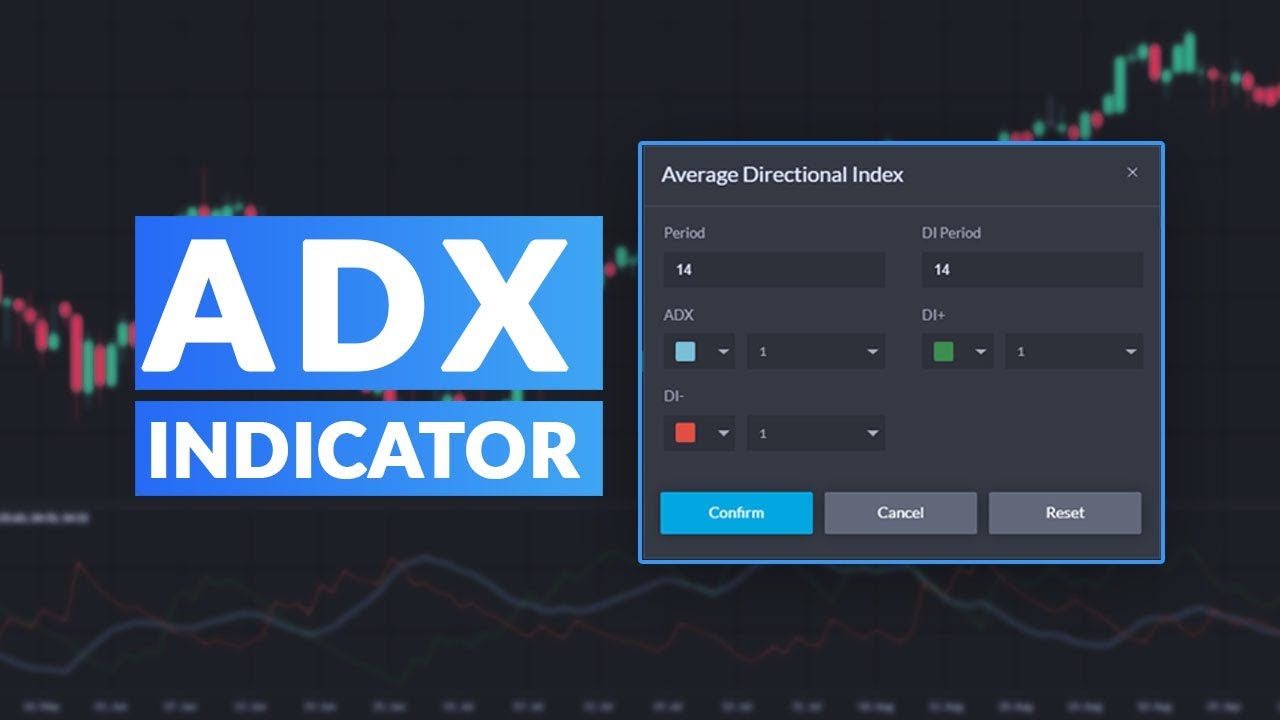 Another type of oscillator is the Average Directional Index or ADX for short.

The ADX is a trend indicator that ranges from 0 to 100, with values below 20 suggesting a weak trend and readings above 50 indicating a strong trend.

The ADX formula is technical, but in a word, the higher the ADX, the stronger the trend.

When the ADX is low, it signals that the price is likely to move laterally or trade in a range.

When the ADX rises above 50, it means that the price is gaining momentum in one direction.

In contrast to Stochastic, ADX does not indicate whether a trend is bullish or bearish. Rather, it only assesses the current trend’s strength.

As a result, ADX is frequently used to determine if the market is in range or beginning a new trend.
The ADX is a “non-directional” indicator. It is based on comparing the highs and lows of bars, rather than the bar’s close.

Regardless of whether the trend is up or down, the larger the reading, the stronger the trend.

How to Make the Most of ADX

Take a look at these cool graphs we found:

From late September through early December, ADX remained below 20 in this first sample.

EUR/CHF was trapped in a range during that time, as you can see from the chart.

However, beginning in January, the Average Directional Index began to rise over 50, indicating that a major trend could be on the way.
And have a look at this! EUR/CHF moved into a sharp slump after breaking below the range’s bottom. That’s about 400 pips in the bag, ooh.

Let’s have a look at the following scenario:

For a long time, ADX was below 20, just like in our first scenario. EUR/CHF was also fluctuating at the time.

The ADX soon surged above 50, and the EUR/CHF broke through the top of its range.

There was a significant upward trend. That’s 300 pips, delivered signed, sealed, and delivered!

If there’s a flaw with ADX, it’s that it doesn’t always tell you whether you should buy or sell.
What it does tell you is whether or not you should join a current trend.

When the ADX drops below 50, it could indicate that the uptrend or downtrend is weakening and that now is a good opportunity to lock in profits.

How to Trade with the ADX

When trading with ADX, one strategy is to wait for breakouts before determining whether to go long or short.

The ADX can be used to confirm whether or not the pair will continue in its current trend.
Another option is to combine ADX with another indicator, preferably one that determines whether the pair is moving higher or downwards.

The ADX indicator can also be used to predict whether a deal should be closed early.

When the ADX falls below 50, for example, it suggests that the current trend is losing pace.

After that, the pair might potentially move downwards, so you might want to lock in those pips now.

“The trend is your buddy,” as the phrase goes.

Until you’re stabbed in the back.

(For a little period, I was engrossed in memories.)

Consider using the ADX to confirm the strength of a trend the next time you think it’s shifting and you’re deciding whether to continue with this “friend” or cut ties.

How to Use Williams %R (Williams Percent Range)

How to Trade with Guppy Multiple Moving Average (GMMA)