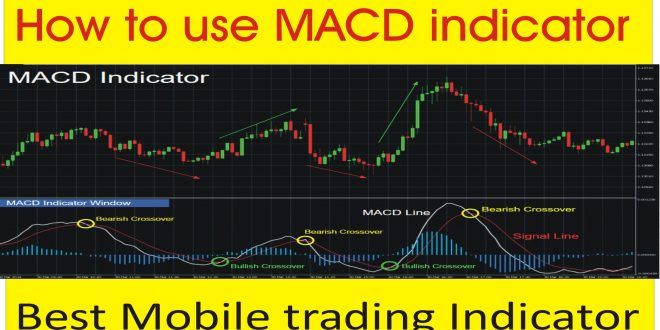 What exactly is MACD?

This technical indicator is a tool for identifying moving averages that indicate a new trend, whether bullish or negative.

After all, finding a trend is a key priority in trading because this produces the most money.

A MACD chart normally has three numbers that establish the parameters.

For example, if the Moving Average Convergence Divergence parameters were “12, 26, 9” (which is normally the default value for most charting software), you would read it as follows:

When it comes to the lines, there is a widespread misunderstanding.

There are two lines in total:

The MACD Line is the “faster” moving average when looking at the indicator.

The Line represents the difference between the 12- and 26-period moving averages in our case.

The MACD Line’s moving average is the Signal Line.

The Signal Line is the “slower” moving average when looking at the indicator.

The slower moving average plots the preceding MACD Line’s average. This would be a 9-period moving average, like in our previous example.

By default, most charts use a 9-period exponential moving average (EMA).

This means we’re using the average of the “faster” MACD Line’s last 9 periods to calculate our “slower” moving average.

The Signal Line’s function is to level down the MACD Line’s sensitivity.

The difference between the MACD Line and the Signal Line is represented in the Histogram.

It’s a graphical representation of how far apart the two lines are.

It may occasionally give you a heads-up that a crossover is on the way.

When you look at our original chart, you can see that the histogram gets bigger when the two moving averages (MACD Line and Signal Line) split.

The faster-moving average is “diverging” or moving away from the slower moving average, which is known as a MACD divergence (Signal Line).

The histogram shrinks as the moving averages come closer to each other. Because the faster-moving average is “converging,” or getting closer to the slower moving average, this is referred to as convergence (Signal Line).

So now you know what MACD stands for. We’ll now demonstrate what it can accomplish for YOU.

How to Trade Using MACD

Because there are two different “speeds” of moving averages, the faster one will certainly react to price movement faster than the slower one.

When this “crossover” occurs, and the line begins to “diverge” or move away from the slower line, it frequently signifies the emergence of a new trend.

The fast line passed UNDER the slow line in the chart above, indicating that a new downtrend had begun.

The Histogram vanishes for a brief moment when the lines intersect.

Because the difference between the lines at the time of the cross is zero, this is the case.

The histogram becomes larger when the decline begins and the fast line diverges from the slow line, indicating a strong trend.

The fast line went above the slow line in the EUR/USD 1-hour chart above, and the histogram vanished. This signaled that the recent slump might be reversing.

The EUR/USD began to rise after that, signaling the start of a fresh uptrend. Imagine gaining nearly 200 pips if you continued trading after the crossover!

MACD has one disadvantage.

After all, it’s only a weighted average of previous prices.

Remember that the MACD indicator is made up of three parts:

Nonetheless, many traders still use MACD as one of their preferred tools.

Fx Pips Guru has a strong group of forex experts who are managing forex accounts of our clients from different brokers dedicatedly. Just hire our forex fund managers here: https://www.fxpipsguru.com/forex-fund-manager/

Placing stops with Fibs so You Lose Less Money

How to Use Forex Keltner Channel

How to Use the Stochastic Indicator